What Meets The Eye?, a lyrical anthology edited by Sophie Stone and Lisa Kelly (Arachne Press) left reviewer Melissa Mostyn both pondering and pogo-ing for days. 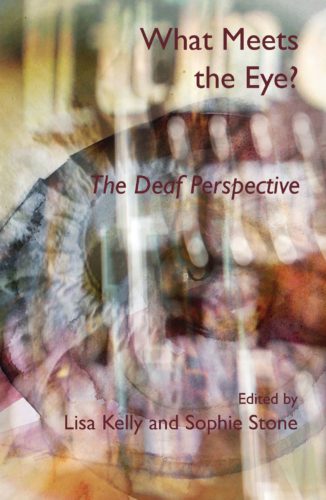 What Meets the Eye: A Deaf Perspective. Book cover

Right now it feels like my community — the Deaf Community — can do no wrong.

Imagine my joy, then, upon receiving What Meets The Eye?, a lyrical anthology edited by Sophie Stone and Lisa Kelly (Arachne Press) that left me both pondering and pogo-ing for days.

This is rightly not, the editors stress, a “definitive take on deafness.” Rather, it’s an invitation to “join us venturing in exciting and varied territories where mountains of prejudice must be climbed, emotional currents swum, and landmarks reached that lend breath-taking perspectives on what it means to be Deaf, deaf or hard-of-hearing.”

And what variety! In under 150 pages the book comprises over 50 short forms, mainly verse, and includes a delightful comedy drama by Sophie Woolley, Neutral, which explores what constitutes sexual assault in the soul-baring age of social media.

What Meets the Eye? is a loose response to the anthology theme of Maps and Mapping set by its publisher, the second in a series and the only one by Deaf and hard-of-hearing writers. It uses its own theme of Movement to maximise opportunities for deaf and hard-of-hearing British writers to flex their creativity and imaginations in a unique landscape where technology, history, language, culture, sentiment and belonging collide like no other.

“Our minds travel when our bodies are forced to stay at home,”said Ralph Waldo Emerson. This is especially true of the book, which was written and complied during lockdown. Once Raymond Antrobus sets the tone with his gorgeously meandering foreword, there’s a sense of travelling to the end throughout with ease metaphorically, literally, and poetically.

I sense a dialogue between its two editors – Lisa Kelly and Sophie Stone are both also actors – indicated by their own poetry, that has helped cultivate a profound and well-crafted interaction between BSL and English. Thus I see no conflict between Sahera Khan’s My Glow, as a piece of evocative BSL poetry, and the extraordinary bilingualism present in Kelly’s A Map Towards Fluency. I’m equally pleased that Arachne Press has committed to publishing BSL translation videos of the book on its website, and look forward to seeing more.

Other compositions like Bones Under Their Feet, by Josephine Dickson, tingles my spine with their haunting, esoteric flow:

Not all the contributions are inspired by the pandemic, but the restrictions become a timely reminder of the aggravated isolation that deaf and hard-of-hearing people face. This can be evidenced in Julie Boden’s Fish and a Blue-Arsed Fly:

Movement, of course, can also mean sign language in motion, or the dance of an audiogram. As a cochlear implant user I could relate to MAPping a New Landscape, DL Williams’ witty retelling of their adjustment to new sounds with a new processor.

“Here be monsters,” Williams laments. “Beware the cackling/crackling crisp packets/seeking the last crisp./Forfend the blaring, waffling,/singing, chattering TV adverts.” The ones that are abated by Ayling-Ellis’ signing in Strictly Come Dancing, I hope?

As well as wit, humour and poignancy, there is charm. Charlie Swinbourne’s DeLorean is an adorable imagining of “a real, blue-eyed living boy who couldn’t say his s’s” in the iconic car of the Back to The Future film franchise that “reverses/Past twelve thousand eye rolls and smirks…To now/Where I explain again that I just misheard.”

Meanwhile, Colly Metcalfe’s Coffee Shop transported me back to the everyday palpitations of ordering a cappuccino while baristas “perform their arm choreography” in a scenario surely familiar to deaf consumers in metropolises everywhere. Would you not feel the anxiety rise of needing the only barista face in the shop that you could read?

This is a world that sidelines its deaf and disabled citizens too quickly in a pandemic. (A prime example, of course, being the Prime Minister’s own flagrant breach of formal court judgement: his briefing on the new COVID-19 variant omitted BSL interpretation altogether.) In such circumstances each new triumph becomes more potent. As a Deaf writer, What Meets The Eye? was a book I badly needed to see.

What Meets The Eye? The Deaf Perspective is out now published by Arachne Press. The publisher is seeking contributions to help fund more BSL translation videos of the anthology. Go to the website for more details.