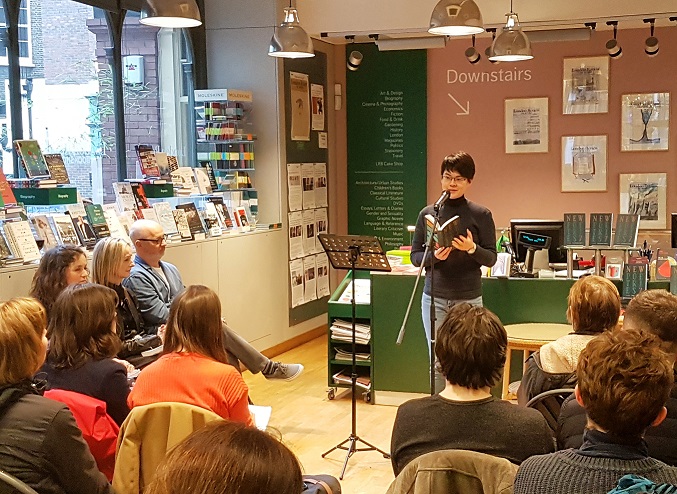 The London Review Bookshop, Bloomsbury, 7pm. Wine glasses clatter as they are placed on the floor, animated conversation fills the air, friends are greeted, coats shrugged off. Michael Schmidt, the founder and managing director of Carcanet, steps before the audience to introduce the four poets who will be reading tonight as part of the launch of New Poetries VII, an anthology that brings together what Michael, in the Introduction to the book, calls ‘a chine, a prickle, a surfeit, a blessing – a group – of new poets’. He is delighted to be in the London Review Bookshop, one of his ‘favourite’ bookshops in the city, and to be introducing the seventh New Poetries, a series that is also one of his ‘favourites’. Many Carcanet poets, he notes, began their writing careers in the anthology, and have gone on to ‘star on our list’, including Sinéad Morrissey, Kei Miller, and Vahni Capildeo. These poets, Michael affirms, ‘help me forward’.

The poets performing tonight – Mary Jean Chan, Helen Charman, Lisa Kelly, and Toby Litt – read in the order that they appear in the book. Michael introduces Mary Jean first, recounting how he was struck by three sonnets that the poet sent in to PN Review. Alluding to Mary Jean’s Hong Kong background, and mentioning his own Mexican American origins, he notes that Carcanet is ‘very much an Anglophone, rather than an English, operation’, and that it is ‘wonderful to find poets from outside of England’. Mary Jean begins by reading the sonnets, describing them as ‘a slightly subversive take on the classical Confucius text’ about how you should honour your parents. Her voice is silky, clear, as she speaks. Next, she reads a bilingual poem. ‘I thought it would be interesting to try to rhyme my mother tongue with English – I speak Cantonese at home’, she explains. ‘speaking in tongues’ is a striking poem, weaving together repetitions of ‘mother says’ and ‘poet says’, as well as the two languages:

mother says: separation of voice
poet says: behave, moonbeam
mother says: the way you ask the moon to behave is transgressive, not Chinese
poet says: my voice is a splinter

‘It’s wonderful to hear poems read that one’s read to oneself several times, and the way the poet inflects them’, Michael observes, after Mary Jean’s reading. Helen Charman is the next poet to read, and Michael notes that when he first read her poems, he ‘couldn’t put them down’. Helen launches straight into a reading of ‘Horse whispering’, rocking slightly with the rhythm of the poem as she reads, hovering over the words she wishes to emphasise. Her head is tilted up to the microphone, and she smiles occasionally at the audience. ‘Agony in the Garden’ is a poem that requires some context, Helen says, and she reads from her explanation at the front of her section of the anthology. The poem centres on John Ruskin and a statement he made in 1854, during the annulment proceedings of his marriage to Effie Gray: ‘It may be thought strange that I could abstain from a woman who to most people was so attractive. But though her face was beautiful, her person was not formed to excite passion.’ Part of the latter phrase appears in the poem, which Helen reads playfully, with full attention from the audience. ‘Tampon Panic Attack’ is my favourite poem of the ones she performs. Flicking through teenage magazines, Helen notes, tongue-in-cheek, left her with ‘a crippling fear of tampons’, which the poem transforms:

. . . Waking up in bloodied underwear once felt
like shame but now is gorgeous, a victory: red sheets are
like flirting.

‘One thing you’ll have noticed is how humorous the poems are’, says Michael, at the close of Helen’s reading. He then introduces Toby Litt, noting that it was Toby’s sequence Life Cycle that really ‘got to’ him. Michael is also pleased to welcome ‘a novelist who’s come over, as it were’, referencing the ten novels that Toby has published. Toby himself, taking the stage, questions, ‘Come over, or come out?’, explaining that he started as a poet, but initially wasn’t sure if his poetry would be published. He begins his reading with ‘Politics / 9.11.16, p.m.’, written on the eve of Trump’s election. ‘I tried to be hyper eloquent, but I also tried to be extremely angry and political’, Toby says of the poem. His voice is level as he reads, and he stands comfortably, feet in a relaxed ballet-esque position. The poems in Life Cycle ‘had a long pre-history before they hit the page’, and were written for two friends who had lost a baby. ‘Not just milk’ features a build-up of repetitions that sound very different in the air to their appearance on the page, where the words seem to tiptoe across the white space:

Toby finishes with ‘an even tireder lullaby’ entitled ‘Hushaby Twinkle’, before Michael introduces Lisa Kelly. Like Mary Jean, Lisa ‘seems to exist between languages’, Michael notes, noting that she once described herself as ‘half-Danish, half-Deaf’. He is drawn to the gaps in her poems, ‘where language has been missed’, and was ‘astonished’ to find himself reading her poems aloud. Lisa begins her reading with ‘Anonymous’, a poem based on a 1993 New Yorker cartoon featuring two dogs at a computer screen, and recites the poem with gusto. The line ‘Once bitten, twice bitcoin’ provokes laughter from the audience, and another poem, on Ikea furniture, is equally witty. ‘A Map Towards Fluency’ is the stand-out poem of the reading, however, and Lisa puts down her book to perform the poem, which requires signing some of the letters of the alphabet using British Sign Language:

The reading ends with thanks to the London Review Bookshop, a clinking of wine glasses, and the steady rise of conversation in the air.